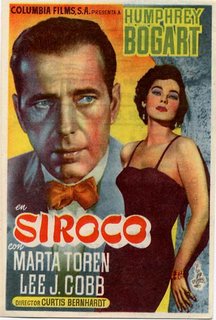 Thanks to Netflix, had a chance to watch Humphrey Bogart, Lee J. Cobb, nd Zero Mostel, among others starring in Curtis Berhnhardt's 1951 Casablanca-inspired Sirocco. it was a little slow and a little stodgy--but very interesting because of its storyline. Set in French-occupied Damascus, Syria in 1925, Sirocco is the story of American arms-smuggler Humphrey Bogart--caught in the middle between the French military and the Syrian Emir's rebellion. It is kind of sophisticated, with a love triangle featuring Bogart, the head of French military intelligence, and his mistress, played by Marta Toren. It's certainly not as good as Casablanca, but some of the scenes are eerily reminiscent of what is going on in places like Baghdad and Lebanon right now. For example, a bombing of a nightclub frequented by foreigners, as well as a plot climax featuring a kidnapping and murder by the Emir's side leading to increased fighting, followed by a hostage-taking and eventually a negotiated cease-fire. Oscar Wilde may have been right: Life does seem to imitate art.

Although Bogart called the film a "stinker" according to Film Noir of the Week, it should interest people who are following events in the Middle East. Plus, Bogart does a great job acting, as does Lee J. Cobb. Marta Toren is pretty good, but no Ingrid Bergman. And Zero Mostel plays an Armenian black-marketeer who almost steals the show.

Bottom line: For maximum effect, watch it now, before peace breaks out...
Posted by LaurenceJarvik at 10:11 AM