For more historical background on this topic, watch my documentary film: WHO SHALL LIVE AND WHO SHALL DIE?
Posted by LaurenceJarvik at 4:44 PM

IN DEFENSE OF ALLEN WEST

by Agustin Blazquez with the collaboration of Jaums Sutton

In a 2002 article titled A VICTORY FOR TYRANNY, http://www.amigospais-guaracabuya.org/oagaq097.php I wrote, "But after all, 56 members of Congress are registered members of the Democratic Socialists of America, which is the largest U.S. affiliate of the Socialist International. No wonder their deep resentment against the U.S. even though they pretend to be patriotic and concerned Americans. The Founding Fathers did not intend for a failed socialist political philosophy to be imposed upon the free people of United States."

His error was to say that they are members of the Communist Party, since officially they are not. They are members of an umbrella organization created and organized by those who support the Marxist goals of the Communist Party. Communists are very secretive about their true affiliation. That's the way they operate. But in essence Allen West was right and finally revealed the truth about something that should have been a well-known fact by now.

But the liberal media immediately accused West of "McCarthyism" because for them it's a major offense to expose communists. Of course, when those on the left don't have a defense they resort to the communist technique of character assassination to discredit the ones who dare to expose a truth. Conservatives and Republicans are worse than communists in their crooked eyes.

There is nothing wrong with Americans belonging to whatever organization they want. What is wrong is to hide this information about public servants, especially from the people who elect them to represent their interests. Most Americans do not espouse that foreign political system that has caused so much hardship and suffering and has killed more than 100 million people the world over. If Americans are informed, they won't vote for them.

Socialism, Communism and even Hitler's National Socialism (Nazi Party) are based on Marxism-Leninism, which was put into practice by Vladimir Lenin in Russia in1917 and has been ravaging mankind ever since.

The information about the proclivity of Democratic Party members of Congress to belong to international socialist organizations has been known to me since the 1990s through sources on Capitol Hill that were outraged by this act of disloyalty to the principles of this nation.

Many members of socialist organizations belong to the Congressional Progressive Caucus (CPC).

Note that “progressive” is a key word that used to mean “advancing” that now can be a code word used to identify hidden socialists, communists and even fascists. "Progressives" has degenerated into an unusual concoction of all these political aberrations hostile to the United States. Once the word's new meaning becomes mainstream, they will come up with a new nice-sounding word. That's what they do to fool you.

The relentless Socialism/Communism is not over. Snap out of that stupid, implanted thought! Wake up to what is going on now around you in the United States. Yes, it is happening here. After years of these people infiltrating into our democratic institutions, it is possible to dupe you into the political nightmare of Socialism. Snap out of that stupor if you want to continue singing “God Bless America”!

The anti-U.S. left, the Marxists and the “progressive” elements, are in control of most of our learning institutions and print and television media and are censoring information to keep you in the dark so you can easily fall prey.

They were the first to adopt “political correctness,” a communist technique (read my article http://www.newsmax.com/archives/articles/2002/4/4/121115.shtml/) in order to manipulate, change and brainwash the masses – now including elementary schoolchildren.

Have you ever wondered why there are so many Marxist professors teaching your children in a capitalist country like the United States? Or did you even know they are there, working on your kids? What can be learned from them when their theories have been demonstrated to be dismal economic and political failures everywhere they have been tried?

In no way, shape or form is this an endorsement of the Republican Party, but based on my observations and experiences in the country where I was born and my 45 years living in the U.S., the Democratic Party has been sliding too far to the left, the anti-U.S. side of the spectrum. I am very concerned about where that party will end up in the not so distant future.

And don't shortchange the significance of this one plank of the Democratic Party's platform. It is the most far-reaching plank, encompassing virtually everything from abortion to gas prices. It's simple: accept it and it determines everything.

Thank you, Congressman Allen West, for your courage. I hope more will follow your example. You are a good American.


Posted by LaurenceJarvik at 3:24 PM

Who Lost the Global War on Terror?

Posted by LaurenceJarvik at 6:29 PM 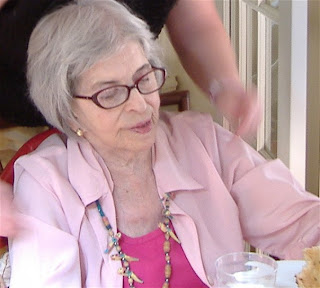 EDYTHE KOFFLER JARVIK Eternal optimist, Edythe Koffler Jarvik, who always believed "everything works out for the best," died April 8, in Salt Lake City, UT, at the age of 96. Forever an adventurer, she moved West at age 91 from her home in Glenbrook. She loved to travel the world, throw dinner parties, wear pink, and have a good conversation. She was a great mentor and a great friend. She taught us to use the good china, that good things come in small packages, and that "your children are just on loan." Edythe was preceded in death by her husband and "best beau", former Stamford physician Norman E. Jarvik; her brothers Dr. Arthur Koffler and Joseph Koffler, and her sister Anne Koffler Roth. She is survived by her sister Fran Koffler Goldstein, Bloomfield, N.J.; daughter Barbara Jarvik, Los Angeles; sons Dr. Jonathan Jarvik (Mary Anne), Pittsburgh, and Dr. Robert Jarvik (Marilyn) New York; five grandchildren and five great-grandchildren; and many favorite nieces, nephews, extended family members and friends. The family would like to extend its love and thanks to Kathy Moll for making the last four years of Edythe's life full and beautiful and making her home "a little spot of Stamford" in Salt Lake City.
Posted by LaurenceJarvik at 9:07 AM


​In a surprise move, the Chinese Communist government announced today, April 1, 2012, a special offer to all Jewish patrons who are celebrating the Passover holiday.  A free Chinese kosher meal will be given out at all local Chinese restaurants, paid for by the Chinese government.

What apparently prompted this move was consideration based on two parallel events: the Chinese Communists’ “Long March,” that started with a small step by the late Chairman Mao (in Hebrew, meaning “What is he?), and Moses and his famous long march through the desert, that is the symbol of Hebrew liberation.  The affinity of both events and the resulting similarity of experiences, as well as the Jewish involvement in the Silk Road trade for hundreds of years, were part of this consideration.  Upon registering with www.PassoverChinese.com, the internet user will be able to print out a coupon for a free kosher Chinese dinner at any location in the United States.

In an arrangement made with the Kosher Chicken and Matzot authorities in Israel, these authorities will provide kosher chicken and matzot to every Chinese restaurant in the United States, all paid for by the Chinese Communist government.  There will be no need for anyone who wishes to participate to show an identity card – all coupons taken from this website will be honored.

The long business history between Jews and Chinese dating back for at least 3000 years has prompted this generous promotional gesture.  This offer will only last for the eight days of the Passover holiday.  The promoters believe that it will support the love of Chinese food among Jews.  The Chinese have not yet targeted their next ethnic group for a similar promotion of Chinese food, but rumors heard at various Chinese restaurants suggest the next recipients to be Native American Indians and Eskimos.
Posted by LaurenceJarvik at 11:10 AM