Posted by LaurenceJarvik at 7:19 AM

Sad to learn that Christopher Hitchens has died.

I met him twice. The first time, in the last century, in the offices of The Nation magazine in New York City. The last, on February 24, 2006, at the "Stand Up for Denmark!" rally outside the Danish Embassy in Washington, DC, which he had organized. Here's a transcript of his remarks at the event, as posted on The Adventures of Chester blog at the time: 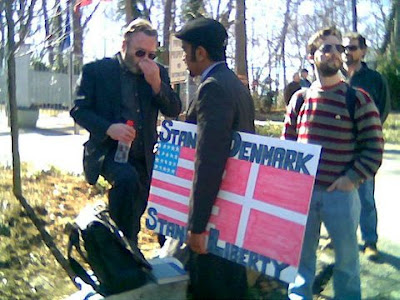 Brothers and sisters, I just thought I would thank everyone for coming and say how touching it is that people will take a minute from a working day to do something that our government won't do for us, which is quite simply to say that we know who our friends and our allies are, and they should know that we know it. And that we take a stand of democracy against dictatorship. And when the embassies of democracies are burned in the capital cities of dictatorships, we think the State Department should denounce that, and not denounce the cartoons.

[Cheers of support and applause]

And that we're fed up with the invertebrate nature of our State Department.

If we had more time, brothers and sisters, I think that we should have gone from here to the embassy of Iraq, to express our support for another country that is facing a campaign of lies and hatred and violence. And we would -- if we did that we would say that we knew blasphemy when we saw it, we knew sacrilege when we saw it: it is sacrilegious to blow up beautiful houses of worship in Samarra. That would be worth filling the streets of the world to protest about.

We are not for profanity nor for disrespect, though we are, and without any conditions, or any ifs or any buts, for free expression in all times and in all places

So, we said we would, I told the Danish embassy that we would disperse at one o'clock. I hope and believe we've made our point, I hope and believe that today's tv will have some more agreeable features, such as your own, to show, instead of the faces of violence and hatred, and fascism, and I think I can just close by saying, solidarity with Denmark, death to fascism.

Hitchens wasn't afraid to take a stand, and his intellectual courage set an example for us all. He was a mensch.

Here's a link to my first account of Hitchens' pro-Denmark rally, and to another article on Stand Up for Denmark!.

Finally, a link to a review of Hitchens' autobiography, HITCH-22.
Posted by LaurenceJarvik at 6:34 AM 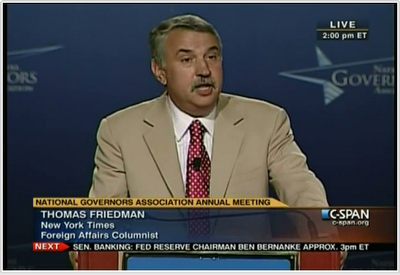 In an unpublished letter to the editor of the New York Times, dated December 14th:

In leveling his criticism of Israel on its domestic agenda, Mr. Friedman ventures into absurd territory when he "illuminates" the reason Mr. Netanyahu was received with a standing ovation when he spoke before the U.S. Congress. His claim that "the ovation was bought and paid for by the Israel lobby" is insulting to the American people and reads like a page out of "The Israel Lobby," the biased treatise by professors John Mearsheimer and Stephen Walt.

Poll after poll, including a recent one by ADL, shows overwhelming support for Israel by the American public. Congressional support reflects that reality.

Mr. Friedman's allegation is not merely wrong and offensive. It's dangerous. It plays into the most insidious conspiratorial notions about Jewish control of American institutions.

Posted by LaurenceJarvik at 12:59 PM

From My Email Inbox (Believe it or not...)

Foodies, Sinologists, and Politicos unite! Come to Monday's author talk at the Tenley-Friendship Library to celebrate the publication of The Cultural Revolution Cookbook. Authors Sasha Gong and Scott Seligman will discuss the stories behind the recipes and their process of collaboration. The book is beautifully illustrated and the recipes include lots of vegetarian dishes. http://www.amazon.com/Cultural-Revolution-Cookbook-Sasha-Gong/dp/9881998468/ref=sr_1_1?ie=UTF8&qid=1323631930&sr=8-1 Copies will be for available for sale before and after the talk (sorry, we can't handle credit cards).

The Tenley-Friendship Library is located at 4450 Wisconsin (at Albemarle Street, across from the Metrorail station). The talk starts at 7pm and will take place in the large conference room on the second floor. Coffee and light refreshments will be served.

Hope to see you there!

Sue Hemberger
for Friends of the Tenley-Friendship Library

NOTE: According to the Necrometrics website, between 2-7 million Chinese were killed in the Cultural Revolution. Other estimates range as high as 30 million. Personally, I'd prefer that the DC Public Library System promoted authors like Sheng Mei-Ma, who wrote CONTRASTING TWO SURVIVAL LITERATURES: ON THE JEWISH HOLOCAUST AND THE CHINESE CULTURAL REVOLUTION, instead.
Posted by LaurenceJarvik at 3:05 PM

New Film About My Old Film Premieres in NYC...

(ht cranky professor)
Posted by LaurenceJarvik at 8:28 AM 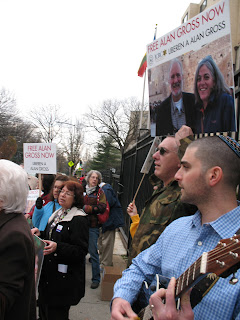 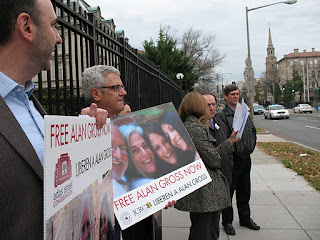 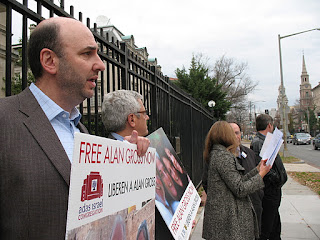 Spent lunch hour today in front of the Cuban Interests Section on 16th Street, NW at a protest with Judy (with megaphone) the wife of hostage American Alan Gross, a USAID contractor reportedly arrested for giving computers to members of the Cuban Jewish community so they could surf the internet. He's been in jail two years, serving a 15-year sentence, and is apparently a pawn in some international intrigue. His wife is a member of my congregation at Adas Israel, which had a delegation at today's protest, sponsored by the Jewish Community Relations Council, that included our former cantor. 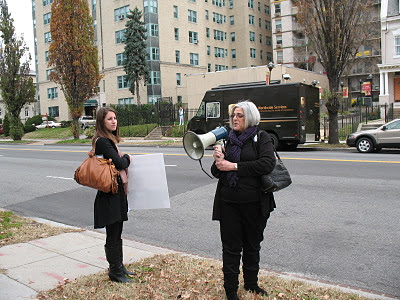 Posted by LaurenceJarvik at 2:00 PM

From 12–1 pm, Adas Israel will lead a vigil in front of the Cuban Interests Section, 2360 16th Street, NW. These weekly vigils are coordinated by the JCRC, with many area synagogues participating. Alan Gross is in a maximum security prison in Cuba since 2009 serving a 15 year sentence for undermining "the independence of Cuba." He was in Cuba on behalf of USAID performing humanitarian work for the peaceful non-dissident Jewish community. Alan's health is failing and both his mother and daughter have serious health issues. Come show your support for Alan and his wife Judy who is a member of our congregation....
Posted by LaurenceJarvik at 5:39 PM