Posted by LaurenceJarvik at 10:54 AM 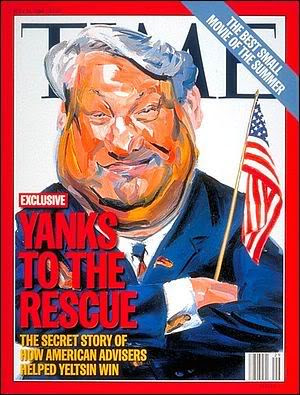 Some three weeks before Election Day, with polls essentially tied due to the margin of error,  the "Russia Card" has become a major campaign issue, with Hillary Clinton accusing Donald Trump of having Kremlin support -- both overt and covert.

Clinton raised specter of Russian influence on Trump's campaign in the first debate, when she declared:

"I was so shocked when Donald publicly invited Putin to hack into Americans. That is just unacceptable."

She went on to suggest Trump had business ties to Russia, then returned to the issue in the second debate:

"...our intelligence community just came out and said in the last few days that the Kremlin, meaning Putin and the Russian government, are directing the attacks, the hacking on American accounts to influence our election. And WikiLeaks is part of that, as are other sites where the Russians hack information, we don’t even know if it’s accurate information, and then they put it out. We have never in the history of our country been in a situation where an adversary, a foreign power, is working so hard to influence the outcome of the election. And believe me, they’re not doing it to get me elected. They’re doing it to try to influence the election for Donald Trump."

Recent reports of attacks on Wikileaks have raised the specter of an escalation of "cyber-warfare" between Russia and the United States in the closing weeks of the Presidential campaign, as well as the possibility of more dangerous military confrontations in the Middle East and Europe.

A precedent may be found in American influence in Russian elections of the 1990s, when Clinton administration support for reformer Boris Yeltsin may have proven decisive in his victory over the Communist Party in the 1993 Constitutional Crisis. At that time, armed factions fought pitched battles in the center of Moscow, circumstances which make our current election season look like a church picnic. Hundreds, if not thousands, were killed in Yeltsin's military assault to re-take the Russian "White House," then in the hands of his Communist opponents. Without American aid, Yeltsin may very well have been overthrown.

So, while we may not remember, it is likely Russia is taking a page from America's playbook by backing a maverick reformer in a stiff confrontation with an entrenched political establishment.

In addition, there are some obvious personal parallels between Yeltsin and Trump.

First, both are successful construction executives: Yeltsin was trained as a civil engineer in Sverdlovsk, and oversaw "crash construction" of multiple high-rise apartment complexes; Trump took over his father's company and erected his own high-rise buildings.

Third, both rose through the establishment they eventually came to challenge: Yeltsin had been a Communist Party official and governor; Trump had been a big Democratic donor who even invited Hillary Clinton to his wedding. Both subsequently soured on the "insiders" and became "traitors to their class."

Fourth, both are strong anti-Communists: Yeltsin confronted the Communist Party in the 1991 coup attempt and again in the 1993 Constitutional crisis; Trump's lawyer was McCarthy sidekick Roy Cohn and he has continually attacked "Political Correctness."

No wonder that a Russian President picked by Boris Yeltsin himself would throw his support to an anti-Communist, crude, provincial, construction tycoon taking on an entrenched establishment, over a competing candidate backed by the Communist Party.

For, although little reported in the US, no doubt the Russian President is well aware that John Bachtell, national chair of Communist Party, USA endorsed Hillary Clinton for President. He declared that "Trump is a danger to the whole world..." and so Communists must work with the Democratic Party for a Clinton victory, because: "Any substantive change in domestic and foreign policy begins by blocking Trump from the presidency and breaking the GOP majorities in Congress." 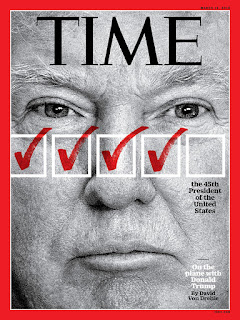 So, in this year's US Presidential election, Vladimir Putin is backing the anti-Communist in the race by supporting Donald Trump--just as Bill Clinton did in the 1990s, when he supported Boris Yeltsin in Russia. Turnabout is fair play, indeed.

Of course, we now know that history was on his side, because Yeltsin won, and Putin is in Moscow.

However, whether Donald Trump is on the right side of history, is yet to be determined...
Posted by LaurenceJarvik at 12:05 PM 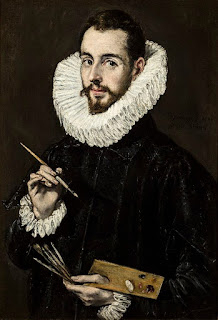 Last night we attended Professor Marinia Lambraki-Plaka's very interesting lecture, PowerPoint presentation, and film screening, co-sponsored by the Society for the Preservation of the Greek Heritage, at the Center for Hellenic Studies in Washington, "The Enduring Legacy of El Greco: Monumental Works in Toledo and Escorial." She was introduced, in part in Greek, by Professor Gregory Nagy of Harvard, the Center's charismatic director.

Speaking inside Washington, DC's mini-Acropolis, just across Whitehaven Street from the Washington home of Hillary Clinton, Professor Lambraki-Plaka presented her case that the work of El Greco, seen by many as one of the foremost Spanish artists of all time, reflects his youthful Byzantine origins as an icon-painter in the town of Candia, prior to his migration to Rome and Toledo. Some 402 years after his death, it was time to recognize that El Greco was Greek.

Professor Lambraki-Plaka is director of the Glyptotek in Athens, and a leading scholar of El Greco. She began her talk by showing slides of thousands of Athenians lined up to view two works by El Greco purchased for the National Museum in Athens upon the 400th anniversary of his death in 2014, truly an impressive sight. On one level, her plea to treat El Greco as a Greek was a curious one, mostly because his name translates from Spanish to English directly as, "The Greek." So what exactly is the problem?

According to the professor, the problem is that many do not accept that The Greek was a Greek artist. She argued that El Greco's artistic style, which may appear strange or personal or avant-garde to the uninitiated, can best be explained through an understanding of Eastern iconographic traditions which El Greco brought to Western art. El Greco is a Greek artist, which explains some of his unconventional techniques, for his approach is rooted in Hellenism and Byzantium. His technical choices are an expression of the Greek Way, as Edith Hamilton called it, and his peculiar style a Greek choice by an artist who was a master of artistic technique of all kinds, including the Western portraiture techniques in his portrait of his son, Jorge Manuel (above). 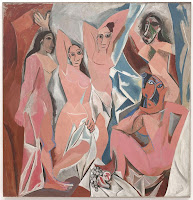 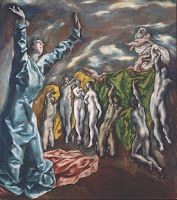 His mastery of so many styles inspired modern artists such as Picasso, who adapted his works as templates for modernist interpretation, for example, Les Demoiselles d'Avignon, based upon El Greco's Vision of St. John.

El Greco's own years spent in Rome, as well as a bitter Counter-Reformation dispute over nudity in The Last Judgement with followers of Michaelangelo, may have led to his move to the ancient Spanish capital of Phillip II, where he could paint in his own personal style. Furthermore, according to Professor Lambraki-Plaka, the Greek element is especially signficant because the development of art in Greece itself, birthplace of Western Civilization and humanism rediscovered by the Renaissance, was denied to the Greeks by Ottoman occupation. In order to participate in the flowering of Western Civilization, El Greco needed to migrate to the West, to Rome and then Toledo--but in so doing, he never lost touch with his Byzantine roots, one reason he signed his name in Greek rather than Latin script. 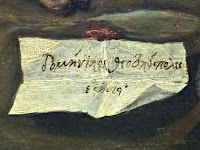 Professor Lambraki-Plaka's remarks did not sound controversial when she made them to the audience at the Hellenic Center, but have been strongly disputed by Professor Cyril Mango, who wrote in The Oxford History of Byzantium: "The most famous Greek painter hailing from Crete, Dominico Theotokopoulos (El Greco), started his career with some rather Italianate icons, but was then completely won over by Mannerism. Despite claims to the contrary, the only Byzantine element of his famous paintings was his signature in Greek lettering." (left) 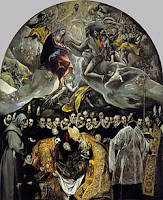 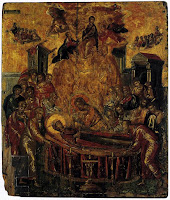 However, to this writer, admittedly an amateur, Professor Lambarki-Plaka's case sounded reasonably persuasive. First, because she displayed early icons painted by El Greco in the Byzantine style; secondly, because she analyzed the composition of El Greco's later Italian and Spanish paintings in comparison to the Byzantine works; thirdly, because of her Greek enthusiasm--and that of Greeks at the reception following her talk as well as those who lined up in Athens; and finally because of detailed visual analysis and comparison of early works to later ones, such as the Cretan Dormition of the Virgin (pre-1567) (left) and the Spanish Burial of Count Orgaz (1586-88) (right). 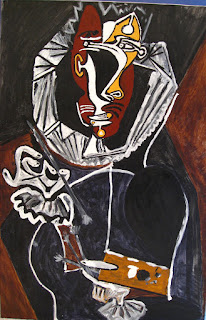 In a deft and diplomatic touch, the Hellenic Center reception following Professor Lambraki-Plaka's talk featured Spanish tapas, a culinary nod to the master's adopted country, as a member of the Greek diaspora who not only contributed to the Western canon, but who also indisputably influenced the development of modern art. Thus Picasso's modernism, in some sense, served as commentary on Byzantine icon-painting, just as El Greco's work did, perhaps nowhere more obviously than in Picasso's iconic 1950 Portrait of a Painter after El Greco.

Posted by LaurenceJarvik at 4:23 PM