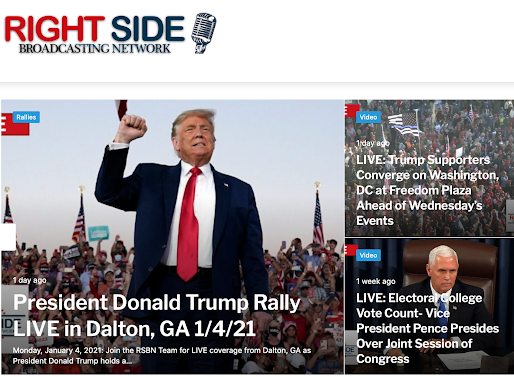 Watching President Trump's Georgia Rally last night on Right Side Broadcasting Network, I couldn't decide whether I was watching his "Last Hurrah" or a Revival meeting.

At times he looked sad, almost poignant. Perhaps due to GOP perfidy, double-cross, and back-stabbing.

It was strange that Senator David Purdue wasn't on the platform with him--what kind of Republican abandons his President in the middle of a fight, to become a no-show for a rally on his behalf on Election Eve? Why couldn't he do what Loeffler did and promise to support the President--even if he later might break his word like Senator John McCain? Not even the pretense of party unity. Ugly.

Likewise, Senators Mike Lee and Lindsay Graham apparently showed up to back Senator Loeffler but not President Trump, so wouldn't stand with him--literally not on the podium. But President Trump pointed to them and said he wasn't happy with Sen. Lee. Again, they could have stood with Trump for one night--for the sake of their party in Georgia...but they didn't.

Yet President Trump gave it all he had on behalf of Loeffler and Purdue and the GOP. And Sen. Loeffler stood with Trump. As did Cong. Marjorie Taylor Greene. They obviously didn't have a problem.

So it was strange. Here was a man being sabotaged by his own party--which was hurting its own chances in Georgia facing two Looney Left if not actually Communist candidates for US Senate.

Does the GOP hate President Trump more than it loves America? What kind of suicidal behavior is that?

Nevertheless, at the same time as I thought this could be the end of President Trump, the thought occurred to me that it might be his salvation.

Why? Because he was showing that he was a man of character, in my opinion of greatness.

While his party was doing the wrong thing--especially the GOP Governor and Secretary of State in Georgia--President Trump was doing the right thing.

Everyone could see it, like Jimmy Stewart standing in the well of his Senate giving his filibuster speech in Mr. Smith Goes to Washington.

All alone, surrounded by evil Senators determined to destroy him, Jimmy Stewart just kept going until he collapsed--and it was enough for him to win.

I don't know whether President Trump will win the support of the US Congress on January 6th--but I do know that he won the hearts of those who saw him speak last night in Georgia.

Like George Washington's steadfast perseverance in the face of impossible odds during the American Revolution, President Trump's stalwart performance in Georgia last night clearly established him as "first in the hearts of his countrymen."

And made obvious that those who oppose him are a gang of bums working for crooks.

Posted by LaurenceJarvik at 7:27 AM