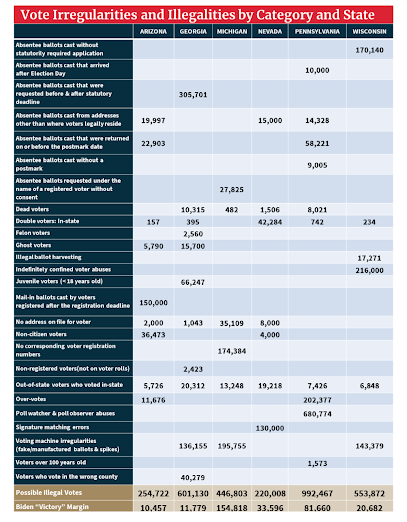 Volume 3 of the Navarro Report is designed to serve as a capstone to what has been a comprehensive analysis of the question: Was the 2020 presidential election stolen from Donald J. Trump? In this report, we provide the most up-to-date statistical “receipts” with respect to the potential number of illegal votes in each battleground state.

The broader goal of this final installment of the Navarro Report is to provide investigators with a well-documented tally of potentially illegal votes on a state-by-state and category-by-category basis. This tally is presented in Figure One on the next page of this report. Note that each number in this figure has a corresponding endnote identifying the source of the number. Note further that we have taken a conservative approach to the count of potentially illegal ballots.

As with previous volumes of the Navarro Report, you can see clearly in Figure One that the number of potentially illegal votes dwarfs the very thin alleged Biden “victory” margins. In the face of this evidence, no reasonable person would conclude that the 2020 presidential election was, beyond any shadow of doubt, a fair election. Rather, anyone who reads this report should feel compelled to seek greater clarity about whether, in fact, this election may have been stolen from Donald J. Trump.

While it is now politically correct in progressive circles and the mainstream media to demand that all Americans submit and confess to the “truth” of what may well be the fiction of a free and fair election for the sake of “unity” and “harmony,” such a Kafkaesque demand in the face of the evidence in this report will likely have the opposite effect.

To wit: almost half the country now believes that there were significant irregularities in the 2020 presidential race; and the failure to fully investigate these irregularities will only increase the number of Americans who have such doubts. This will be particularly true if the suppression of what necessarily must be a search for truth is facilitated by the authoritarian – nay fascist – behavior of a small group of social media oligarchs who have taken it upon themselves to de-platform and censor tens of millions of pro-Trump Americans who now find themselves victims, rather than consumers, of platforms like Facebook, Twitter, and YouTube.

In considering these truths, let us never forget two things: (1) The Democrat Party and its operatives stole the 1960 Presidential Election – it happened then and it can happen again; and (2) it took decades for historians to finally acknowledge the 1960 version of the Immaculate Deception in the face of the same kind of virtue-signaling and cancel culture pressures we are witnessing today.

Despite a similar quest to silence Republican and conservative voices today, 74 million Americans who voted for President Donald J. Trump have the right to a full investigation and bipartisan search for truth. If, however, the Democrat Party, RINO elements of the Republican Party, the anti-Trump mainstream media, and the out-of-control censoring social media oligarchs do not cease and desist from their efforts to suppress the search for truth about the 2020 election, history will judge all of these people, corporations, and institutions in the harshest possible manner.

At this point, we have moved dangerously in what seems like a nanosecond from a full and vibrant American Democracy to a Communist Chinese-style, Cancel Culture, Police State guarded by a collusive social media oligopoly that is beyond out of control.

In the remainder of this report, we will simply present the statistical “receipts” on a state-by-state and subcategory-by-subcategory basis what may well be the worst theft in American political history. If the U.S. Congress and State Legislatures across the six battleground states ignore this evidence, they will do so not just at their own peril but also at the peril of America’s faith in our elections and the sanctity of our Republic...

Posted by LaurenceJarvik at 9:51 AM