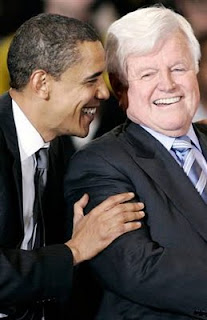 As I mentioned in a post after Ted Kennedy's Arlington funeral, he has continued politicking from beyond the grave, much like Mayor Skeffington as played by Spencer Tracy. So, not surprisingly, last night's speech by President Obama had its own "Win One for the Gipper" moment, featuring excerpts from Senator Kennedy's letter to President Obama. Today, Talking Points Memo published the full text:

I wanted to write a few final words to you to express my gratitude for your repeated personal kindnesses to me - and one last time, to salute your leadership in giving our country back its future and its truth.

On a personal level, you and Michelle reached out to Vicki, to our family and me in so many different ways. You helped to make these difficult months a happy time in my life.

You also made it a time of hope for me and for our country.

When I thought of all the years, all the battles, and all the memories of my long public life, I felt confident in these closing days that while I will not be there when it happens, you will be the President who at long last signs into law the health care reform that is the great unfinished business of our society. For me, this cause stretched across decades; it has been disappointed, but never finally defeated. It was the cause of my life. And in the past year, the prospect of victory sustained me-and the work of achieving it summoned my energy and determination.

There will be struggles - there always have been - and they are already underway again. But as we moved forward in these months, I learned that you will not yield to calls to retreat - that you will stay with the cause until it is won. I saw your conviction that the time is now and witnessed your unwavering commitment and understanding that health care is a decisive issue for our future prosperity. But you have also reminded all of us that it concerns more than material things; that what we face is above all a moral issue; that at stake are not just the details of policy, but fundamental principles of social justice and the character of our country.

And so because of your vision and resolve, I came to believe that soon, very soon, affordable health coverage will be available to all, in an America where the state of a family's health will never again depend on the amount of a family's wealth. And while I will not see the victory, I was able to look forward and know that we will - yes, we will - fulfill the promise of health care in America as a right and not a privilege.

In closing, let me say again how proud I was to be part of your campaign- and proud as well to play a part in the early months of a new era of high purpose and achievement. I entered public life with a young President who inspired a generation and the world. It gives me great hope that as I leave, another young President inspires another generation and once more on America's behalf inspires the entire world.

At the Denver Convention where you were nominated, I said the dream lives on.

And I finished this letter with unshakable faith that the dream will be fulfilled for this generation, and preserved and enlarged for generations to come.

With deep respect and abiding affection,

IMHO, If President Obama can't pass a bill this year with the considerable help of Ted Kennedy's ghost, he's not the politician I think he is...
Posted by LaurenceJarvik at 11:13 AM