Another Good Move by President Obama... 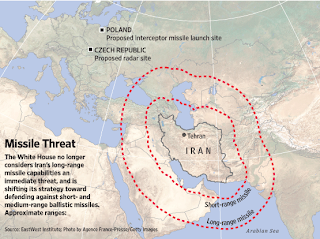 Cancelling "missile defense" in Poland and the Czech Republic.

These were symbolic, token, "tripwire" installations--which the Russians believed violated a promise made to Gorbachev that NATO would never expand into the former Warsaw Pact, extracted in exchange for withdrawing Russian troops from Europe. When Russia was weak, the US pushed ahead. Now that the US is weak, Russia could be expected to push back. Since, IMHO, a strong Russia makes Europe behave in a more pro-American fashion, and a weak Russia allows Europeans to play their traditional Talleyrand diplomacy, a strong Russia and a weaker Europe is in American interests. Look, for example, at British perfidy in releasing the Lockerbie bomber in exchange for a BP oil concession. Russia has plenty of oil, so would probably be a more dependable ally than Britain (as we saw in World War II, where the Soviet Army bore the brunt of battle). All the Russians wanted, when I was living in Moscow, was to be treated as an "equal partner" instead of a "defeated foe." We didn't do it when we could have negotiated from a position of strength. Now that we are in trouble in Afghanistan and Iraq, the Obama administration is hopefully doing it...although from a Bush administration-created position of weakness that means the price paid to Russia (and inevitably China) is higher than had a similar deal been struck on September 12, 2001. Eight wasted years, eight trillion wasted dollars...but as Winston Churchill famously noted: You can count on Americans to always do the right thing--after they have exhausted every possible alternative.

Even Polish-American geostrategist Zbigniew Brzezinski has finally changed his tune, now saying that the US cannot manage without making Russian and Chinese security deals, as detailed in his current Foreign Affairs article, An Agenda for NATO: Towards a Global Security Web.

With Russia and China on our side, I think we may see the Iranians change their tune. Iran was divided between the Russians and the British once before, and they probably don't want their country split in pieces again.

Bravo, Mr. President! With real help from Russia and China, and the withdrawal of Old and New Europe from the field of battle (IMHO, it was a mistake to reactivate the German Army and the Japanese Navy in this war, pure symbolic and poorly thought out tokenism), I doubt the current worldwide Islamist fundamentalist insurgency will last too much longer...
Posted by LaurenceJarvik at 4:39 PM