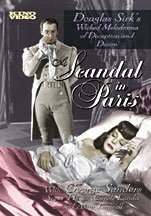 The red envelope from Netflix last week contained a nice surprise from my own distributor's (KINO International) catalog: Douglas Sirk's A Scandal in Paris. Starring George Sanders and Akim Tamiroff as a couple of French thieves who end up running the police force--Sanders plays François Eugène Vidocq, the 19th century French commissioner of police who penned a scandalous Casanova-like memoir--it is truly a story of redemption and second chances (as David Mamet said in another context). Funny, serious, sad, and happy, Douglas Sirk combines melodrama, comedy, and social commentary in a charming tale of tragedy with a happy ending. There is also an amusing commentary on the role of art, when the two thieves pose for a church's illusration of St. George slaying the Dragon--a joke that becomes serious by the end of the picture.

I liked A Scandal in Paris even more than Rebel Without a Cause. Add it to your Netflix queue.
Posted by LaurenceJarvik at 6:58 AM