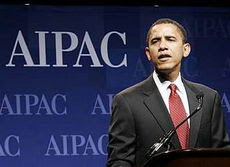 The presumptive Democratic nominee spoke to the American-Israel Public Affairs Committee convention yesterday, on the day he won the Presidential nomination delegate count:

You see, my great uncle had been a part of the 89th Infantry Division – the first Americans to reach a Nazi concentration camp. They liberated Ohrdruf, part of Buchenwald, on an April day in 1945. The horrors of that camp go beyond our capacity to imagine. Tens of thousands died of hunger, torture, disease, or plain murder – part of the Nazi killing machine that killed 6 million people.

When the Americans marched in, they discovered huge piles of dead bodies and starving survivors. General Eisenhower ordered Germans from the nearby town to tour the camp, so they could see what was being done in their name. He ordered American troops to tour the camp, so they could see the evil they were fighting against. He invited Congressmen and journalists to bear witness. And he ordered that photographs and films be made. Explaining his actions, Eisenhower said that he wanted to produce, "first-hand evidence of these things, if ever, in the future, there develops a tendency to charge these allegations merely to propaganda."

I saw some of those very images at Yad Vashem, and they never leave you. And those images just hint at the stories that survivors of the Shoah carried with them. Like Eisenhower, each of us bears witness to anyone and everyone who would deny these unspeakable crimes, or ever speak of repeating them. We must mean what we say when we speak the words: "never again."

It was just a few years after the liberation of the camps that David Ben-Gurion declared the founding of the Jewish State of Israel. We know that the establishment of Israel was just and necessary, rooted in centuries of struggle, and decades of patient work. But 60 years later, we know that we cannot relent, we cannot yield, and as President I will never compromise when it comes to Israel's security.

I have long understood Israel's quest for peace and need for security. But never more so than during my travels there two years ago. Flying in an IDF helicopter, I saw a narrow and beautiful strip of land nestled against the Mediterranean. On the ground, I met a family who saw their house destroyed by a Katyusha Rocket. I spoke to Israeli troops who faced daily threats as they maintained security near the blue line. I talked to people who wanted nothing more simple, or elusive, than a secure future for their children.

I have been proud to be a part of a strong, bi-partisan consensus that has stood by Israel in the face of all threats. That is a commitment that both John McCain and I share, because support for Israel in this country goes beyond party. But part of our commitment must be speaking up when Israel's security is at risk, and I don't think any of us can be satisfied that America's recent foreign policy has made Israel more secure.

Hamas now controls Gaza. Hizbollah has tightened its grip on southern Lebanon, and is flexing its muscles in Beirut. Because of the war in Iraq, Iran – which always posed a greater threat to Israel than Iraq – is emboldened, and poses the greatest strategic challenge to the United States and Israel in the Middle East in a generation. Iraq is unstable, and al Qaeda has stepped up its recruitment. Israel's quest for peace with its neighbors has stalled, despite the heavy burdens borne by the Israeli people. And America is more isolated in the region, reducing our strength and jeopardizing Israel's safety.

The question is how to move forward. There are those who would continue and intensify this failed status quo, ignoring eight years of accumulated evidence that our foreign policy is dangerously flawed. And then there are those who would lay all of the problems of the Middle East at the doorstep of Israel and its supporters, as if the Israeli-Palestinian conflict is the root of all trouble in the region. These voices blame the Middle East's only democracy for the region's extremism. They offer the false promise that abandoning a stalwart ally is somehow the path to strength. It is not, it never has been, and it never will be.

Our alliance is based on shared interests and shared values. Those who threaten Israel threaten us. Israel has always faced these threats on the front lines. And I will bring to the White House an unshakeable commitment to Israel's security.

Posted by LaurenceJarvik at 3:08 PM