The Accomplices Opens in Hollywood 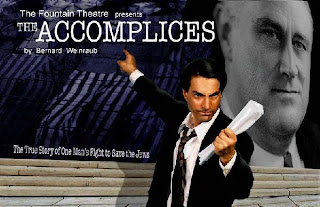 It's gratifying to see that Bernard Weinraub's play, somewhat inspired by my documentary film on the subject, is scheduled to premiere in Hollywood on July 12th at the Fountain Theatre, directed by Deborah La Vine. Here's the blurb:

THE ACCOMPLICES
a true story

directed by Deborah LaVine
(director of A Shayna Maidel and Kindertransport)

The true story of Hillel Kook (aka Peter Bergson).

The FBI spied on him.

The State Department wanted him deported.

Yet despite this intense and sometimes frenzied opposition, firebrand activist Hillel Kook (known as Peter Bergson) succeeded in shattering the wall of silence that surrounded news about Hitler's annihilation of the Jews.

During World War II, Kook spearheaded an extraordinary campaign of public rallies, hard-hitting newspaper advertisements, and lobbying in Congress that forced America to confront the Holocaust. Whether by mobilizing hundreds of rabbis to march on Washington, or by recruiting Hollywood celebrities such as Ben Hecht, Edward G. Robinson, Paul Muni, and Eddie Cantor to support the Jewish cause, Kook displayed an uncanny ability to take a long-ignored issue and propel it to the forefront of public interest.

Veteran NY Times reporter Bernard Weinraub writes a blistering account of the fight to save millions, and the conspiracy of silence and inaction that continues to haunt us to this day.

And here's an article in Jewish Theatre News:

Weinraub was a political reporter based in Washington D.C. when he was assigned to cover a documentary called Who Shall Live and Who Shall Die? by the young filmmaker Laurence Jarvik. "I became personally interested in the story," he explains. "Some of the men who had been in Bergson's group were living in New York at the time and I began interviewing them, but I wasn't sure where I would go with it. Then I came to L.A. years later and took a playwriting course at UCLA. It was taught by The Fountain Theatre's Simon Levy, and there I wrote the first scene of what was to become The Accomplices."

The finished play won a Stellar Network award, which led to its premiere in New York by The New Group in March, 2007 and a Drama Desk Award nomination for Best New Play. It had its second production at the GableStage at the Biltmore in Coral Gables, Florida. "[Weinraub] shows the makings of a forceful political scribe," wrote Daily Variety, noting the "unwavering intelligence" of The Accomplices. "This is a story that needs to be told, and Weinraub does so with moving clarity," agreed Time Out New York. Said the Jerusalem Post, "[Weinraub's] riveting play has the ability to tell this story to an audience that may never crack open a history book. In resurrecting this confrontation for the stage, he has tapped into a message that is as timely as it is dramatic."

There's more about it in this Playbill article. You can buy tickets to opening night on the Fountain Theatre website--$28.00...
Posted by LaurenceJarvik at 11:43 AM