What I Saw at the Inauguration...

A friend emailed me to ask what I saw at the Inauguration.

We were waaaay in the back, behind the Washington Monument, so mostly saw the crowd. The ceremony was on a Jumbotron, but it wasn't very close, either. The sound went in and out, as the wind shifted, the loudspeakers were more like softspeakers. So we missed almost everything, including the Chief Justice's botched Oath of Office. But, on the other hand, we were there, with the crowd. It was a very nice, happy crowd. Some people, especially it seemed older African-American women, had tears running down their cheeks. The crowd was about 1/2 black and 1/2 white. Everyone was smiling and very friendly. Despite the obstacles placed by Department of Homeland Stupidity crowd control--concrete barriers in the middle of where the crowd needed to walk, cyclone fencing where the crowd needed to exit--people took it all in good humor...storming the barricades where necessary, but without any apparent irritation. 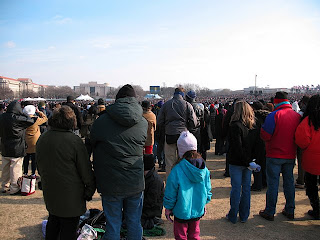 We saw the puffs of smoke from the 21-gun salute in the distance, which was exciting. Otherwise, just looked at the Capitol dome, and said, that's where it is happening.

While the new President had his lunch, we went to the National Press Club to get out of the cold (our friends were from Chicago, so we were warmly dressed in long johns, double wool socks, Thinsulate (R) hats, etc. which was fine at 19 degrees. The Press Club bar was packed, and they had installed new flat-screen TVs for the occasion, so we watched the coverage on a number of channels. It was a shock when Senator Kennedy collapsed, luckily he didn't die. When the parade started, we craned and peeked at an angle through the window towards Pennsylvania avenue, where we couldn't see very much, but did see all the security and the crowd. When Obama approached 14th street, I went downstairs with one of my Chicago friends, but we couldn't get near because of the riot fences and barriers. 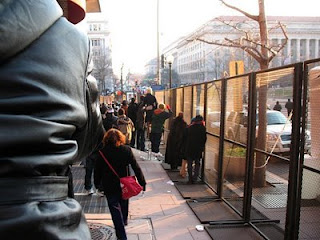 We saw the top of Rosa Parks's bus, and heard some cheers as the President walked (or rode?) by--like a scene in a Fellini film. After Obama passed, things got easier. The barriers opened up, and the Cook County Sheriff's Police detailed to our street let everyone watch the Inaugural Parade. 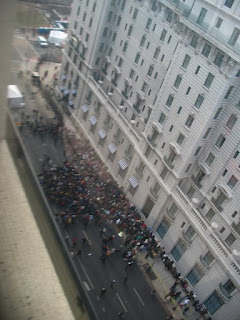 The parade was the best part! It looked just like 19th-century engravings. There were American Indian chiefs wearing headdresses, carrying tomahawks, dressed in leggings, riding Palomino ponies. There was the Navy Band, the Marine Corps Band, a whole lot of high school and college bands from every state. There were Medal of Honor winners riding in carriages. There were baton-twirlers, and drummers, and floats from different states. We left as it grew dark, but the parade went on and on and on. A memory for a lifetime.

The night before the inauguration, we had attended (thanks to our Chicago friends) the "Big Shoulders Ball" (unofficial) at the Black Cat Nightclub, organized by and for Chicagoans from "The Hideout"--a Chicago nightspot. Lots of different acts, all from Chicago. Our favorite: Honeyboy Edwards, a 93-year old blues singer who told me he still tours to some 75 cities a year. Crowd was 30-ish, not too young, not too different from college rathskeller crowds of our youth. The times, they are NOT changing...at least not yet. 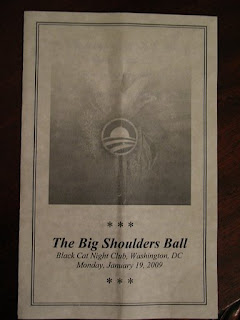 Following the inauguration, we went to two unofficial balls. One at the Louise-Dickson-Hurt home for the aged, where the district residents seemed happy. The other at the Bethesda Unitarian meeting house, a really big congregation, dancing the night away (I didn't know Unitarians danced) until the close--which featured the choir singing "America the Beautiful"...all the stanzas. It was very moving, being with descendants of Abolitionists from Boston at this moment. These words of Katherine Lee Bates' poem seemed particularly apt:

America! America!
God mend thy ev'ry flaw,
Confirm thy soul in self-control,
Thy liberty in law.

O beautiful for heroes prov'd
In liberating strife,
Who more than self their country loved,
And mercy more than life.

America! America!
May God thy gold refine
Till all success be nobleness,
And ev'ry gain divine...
Posted by LaurenceJarvik at 8:06 AM