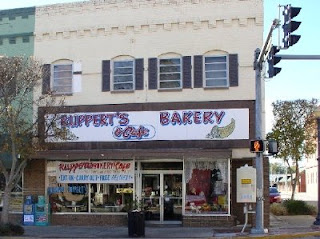 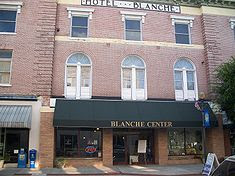 In Lake City for a funeral last Friday, had lunch at Tucker's Restaurant in the historic Blanche Hotel (I recommend the fish fry with cheese grits). According to the Wikipedia entry, Al Capone and Johnny Cash were among the guests who stayed there in years gone by. We were told of its glory days as home-away-from-home to tobacco-buyers from up North. It's now an office building.

Earlier, we had enjoyed morning coffee and a cinnamon bun at Ruppert's Bakery and Cafe, a block away. It featured a photo of General Charles P. Summerall, an ancestor of football hero Pat Summerall (also of Lake City), as well as pictures of the original campus of the University of Florida (now a VA hospital), established in Lake City as Florida Agricultural College in 1853 (Lake City had once been known as Alligator City, hence Florida "Gators").
Posted by LaurenceJarvik at 9:29 AM