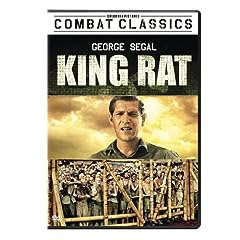 What a movie: slow-moving, stark, depressing, haunting, thought-provoking. It's about what it takes to survive, about the struggle in each person between good and evil, about war and peace, POW camps, the Japanese occupation of Asia, the A-bomb--and Anglo-American relations, as well.

The cast of this adaptation of James Clavell's autobiographical 1962 novel makes the film worth watching just for the acting: George Segal is King Rat, the American black-marketeer, a US Army corporal who runs the rackets in a Singapore POW camp; James Fox is Marlowe, a sarong-wearing British officer who falls under his spell. Supporting cast reads like the Masterpiece Theatre stock company--John Mills, Leonard Rossiter, Denholm Elliott.

It makes you think, it makes you feel, and it sticks with you for a long time afterwards. (Not suitable for children or the squeamish, since the film's POWs eat rats and a dog).
Posted by LaurenceJarvik at 4:57 PM