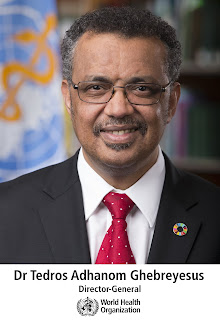 by Agustin Blazquez with the collaboration of Jaums Sutton

The secrecy and deception surrounding the spread of the worldwide Coronavirus pandemic that led to multiple failures by the World Health Organization is not the fault of China alone.

Rather, it's the end result of a deceptive philosophy based in falsehoods and propaganda to keep its people and the rest of the world out of the loop.

If the cruel reality were ever known, there would not be so many “useful idiots” falling for it.

The behavior of China's silence related to the Coronavirus is a common, and perfectly normal, procedure to follow in totalitarian communist regimes.

Everything bad that happens inside communist countries is a State Secret.

The survival and proliferation of the system requires it.

Fifteen years ago, I had in my home four legal immigrants from my former country. One of them was their 6 year old girl.

After a few weeks she said something very surprising at the dinner table after she already have been exposed to American television news. Her remarkable comment was, “I don't like this country because bad things are happening here all the time. In Cuba nothing happens!”

Her clever observation was based in the fact that in communist Cuba they don't report crimes, accidents or anything negative that happens within the island.

All the bad news comes from capitalist countries.

In the 1980s I had a visitor from Cuba, from a relatively well-educated family in Havana.

I took him to the Air & Space Museum. To my surprise, while observing the Lunar Landing Module, he exclaimed that he didn't know that Americans had landed on the Moon in 1969!

He didn't know about the Sky Lab or the Apollo-Soyuz rendezvous in space, either.

I rest my case.

China has just performed according to communist rules during this worldwide Coronavirus pandemic.

So wake up Americans, don't be surprised!

What happened is just another end result of Communism.

How many more are going to die as a result of the usual internal secrecy under Communist rule?

In relation to the WHO (World Health Organization) cooperation with China in this ruse, I have another anecdote to share...

In 1967, after I arrived in the U.S., an acquaintance recommended that I apply to work at WHO headquarters in Washington, DC, also known as the Pan-American Health Organization.

I did--and was surprised by some of the people I met there.

When they discovered that I was from Cuba they were told me how much they admired Castro's revolution.

They also congratulated me on what good health care they have in Cuba, and expressed personal admiration that it was free for everybody.

Well, I had myself lived and suffered from the lack of medicines in Cuba.

I knew personally how Cubans wrote to relatives in the U.S. begging for medicine, and the reality that Castro's regime confiscated half of those medical shipments.

I had witnessed a young lady who died only because the communist regime took her U.S.-sent medicines.

I saw and experienced the real cruelty of a communist totalitarian system.

My brief work with WHO was therefore a disappointing experience.

If I could see it years ago, their attitude towards Communism obviously wasn't a secret. The sympathy of WHO bureaucracts  toward communist regimes has been clear for years.

Therefore, I am not surprised by their recent collaboration with China.  Unfortunately, the WHO is now part of the Chinese Communist life-support system.

Sadly, U.S. taxpayer dollars are given to that institution, without the requirement that it be freed from Communist influence.

The result of American negligence in this regard has been predictably tragic.
Posted by LaurenceJarvik at 4:01 PM