Garry Apgar's Mickey Mouse is a Symbol for Our Time 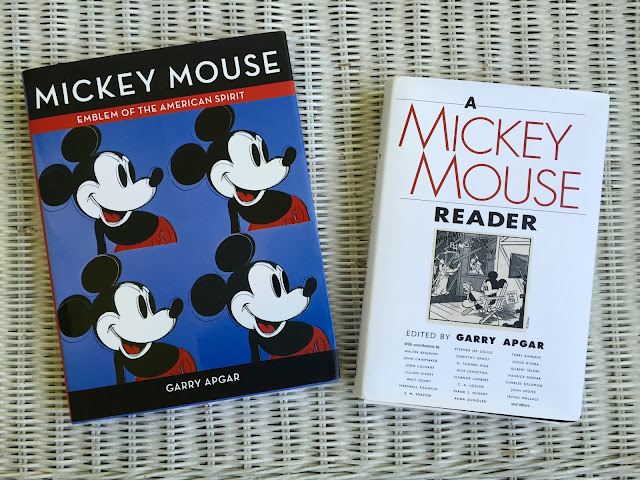 In his two recent books on the celebrated American rodent--a magisterial art historical survey published by the Walt Disney Family Foundation, titled Mickey Mouse, Emblem of the American Spirit; and an academic sourcebook published by the University Press of Missisisippi, A Mickey Mouse Reader, Garry Apgar's Mickey Mouse is portrayed an "emblem of the American spirit" who inspires the nation to overcome difficulties--beginning with his youth in the Great Depression.

Just as I had opened these 2 beautifully written and illustrated volumes for review, news came of the horrific massacre in Orlando, home to Walt Disney World, where, The Daily Mail reported gunman Omar Mateen had been a Disney fan himself:

"The walls of the apartment are adorned with photos of Mateen's three-year-old son. Loads of toys including a Spiderman bicycle, toy trucks and Mickey Mouse posters can be seen throughout the two-bedroom home...There is a Mickey and Minnie Mouse calendar marked 'D-Day, 10 pm' on June 7th. The real D-Day is June 6th leaving open the question was Mateen planning something sooner than the June 12 morning of horror. Or was it just marked for Ramadan, the Muslim holy holiday?"

It seemed that Mickey Mouse had found his way into a story not entirely in keeping with his more conventional image as a playful sprite.

Far from being the "Happiest Place on Earth," Orlando at that moment was perhaps the saddest--a crucible for all the international cultural, political, religious, sexual and military tensions of the planet, rather than a "Magic Kingdom" of fantasy and fun.

By linking Orlando with  International Terror, the massacre was objectively an attack on Walt Disney, as well as an LGBT nightclub--for Orlando is a city described as "married to the Mouse" by Richard Fogelsgang.

Therefore it did not come as a surprise to read that the gunman had cased Walt Disney World and Downtown Disney, before deciding to attack the Pulse Club.

Security at Disney is high, and there was certainly a greater chance of a mishap in going for, say Snow White's Castle.

Nevertheless, downtown Orlando is not far away, and the location of the club reminds everyone that Disney is also in Orlando--many millions of people have been to Disney, and some of the victims may have worked for Disney.

So seeing Mickey Mouse as most recent target of  Jihad is not far-fetched.  As Apgar discusses, the Mouse represents the "American spirit"-- most obviously "the pursuit of happiness" guaranteed in the Declaration of Independence, and Walt Disney's oeuvre.

That our world has been shaped in part by Disney and Mickey Mouse, is a big claim. But Agpar backs it up, for he treats Disney as both an artist and a sociological phenomenon.

Did Disney affect even those who pretended to be enemies of capitalism? Did he have a role in the last great ideological struggle, the Cold War? Yes.

What would a communist artist have thought of Disney?

Perhaps a clue might be found in a couple of pages in Apgar's reader, written by the husband of the now almost as iconic (at least among art students) Frida Kahlo, Diego Rivera, contemplating what artistic life might hold after the revolution triumphs:

Finally we may conclude that perhaps if the films can be preserved, the people who at last will possess a theatre, will refuse to accede the cine-dramas most admired today. The masses which will have realized by then the genuine revolution, will not interest themselves greatly in the 'revolutionary films' of today. An tall that, together with the pictures and statues and poetry and prose which may have survived the general cleansing of the world, will be looked at with compassionate curiosity. But probably the animated cartoons will divert the adults then as now and make the children die laughing.

And the esthetes of that day will find that MICKEY MOUSE (emphasis Rivera's) was one of the genuine heroes of American Art in the first half of the 20th Century, in the calendar anterior to world revolution.

Or, consider the views of Frankfurt School founder Walter Benjamin:

Similarity to Fairy Tales. Not since fairy tales have the most important and most vital events been evoked more unsymbolically and more unatmospherically. There is an immeasurable gulf between them and Maeterlinck or Mary Wigman. All Mickey Mouse films are founded on the motif of leaving home in order to learn what fear is.

So, the explanation of the huge popularity of these films is not the mechanization, their form; nor is it a misunderstanding. It is simply the fact that the public recognizes its own life in them.

In 1968, James Michener denounced Mickey Mouse as "one of the most disastrous cultural influences every to hit America," in a New York Times Magazine article titled "The Revolution in Middle Class Values."

But during World War II, the British Royal Air Force had another view. The called the electrical distributor used to release the bombs which targeted Nazi Germany: "Mickey Mouse."  The Royal Navy called its minesweepers, "Mickey Mouses" (or "Mickey Mice," or "MMs"). And one RAFT Lancaster bomber was dubbed "Mickey the Moocher" and decorated with a picture of a pot-bellied Mickey Mouse--transporting a bomb.

Author and editor Garry Apgar himself compares Mickey Mouse to Charles De Gaulle, noting that in 1944 "Mickey Mouse" had been used as a code for Normandy landings on D-Day in 1944. Thus did Mickey save France in World War II, and as Apgar points out:

...Yet, the mouse remains an image of optimism and pluck, and nowhere more than in France. This is one Disney-crazed country! You're liable to run into Walt's progeny decorating custard cups, mustard jars or postcard racks anywhere in town.

Not to mention, Disneyland Paris. So, a connection between the Paris attacks on Charlie Hebdo, Hyper Cacher, and Bataclan and the Orlando massacre becomes apparent in the meaning of Walt Disney's mouse.

As Apgar concludes his introduction to Mickey Mouse: Emblem of the American Spirit:

Mickey is nothing if not iconic. To be authentically "iconic," however, entails an attribute greater, and more provocative, than garden-variety celebrity, notoreity, or excessive familiarity. Lest we forget, the term derives from a word, ikon, used to describe traditional sacred portraits in Eastern Orthodox religious art. Even today, properly applied, it notes a being or thing touched by a vital spark, providing meaning, comfort and connectedness across generational, ethnic, national and class lines.

Now that jihadists have gone after Mickey by attacking his hometown, perhaps it is time to think about asking Mickey Mouse to come to our rescue, as he did in World War II and the Cold War?

Posted by LaurenceJarvik at 7:07 PM