Idealism met reality in Washington on April 16th, when Harvard University's Center for Hellenic Studies hosted "Maenads and Muses: A Celebration of the Dances of Isadora Duncan and the Greek Ideal." It was a historic clash of civilizations--the beauty, transcendence and inspiration of imaginary Athenian festivals amidst the horse-trading, log-rolling, and lobbying activity in Our Nation's Capital in the midst of an election cycle. Director Gregory Nagy deserves kudos for organizing such a memorable "outreach" performance. 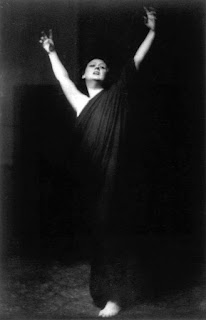 Costumed in flowing gowns inspired by Greek vases, sculptures, and bas reliefs, the Duncan Dance Project company brought to life the beauty, grace and transcendence pioneered by the heroic dancer from San Francisco; one who tragically ended her life as a Soviet citizen living in exile in Paris in a freak  automobile accident due to the type of flowing scarf used in her idiosyncratic recreations of archaic dance (a scarf given to her by movie director Preston Sturges' mother).

The Center's terpsichorean celebration lasted all afternoon and on into the evening hours, and as befits a research institution, the program featured an academic panel, reception, and "talkback."  Thus the spectacle of dance performed in nature combined with scholarly and academic discussions of the influence of Greek ideals on aesthetics and philosophy.

Although the festivities lasted until 9 pm; I attended only the first act in the day's offerings, from 3-5 pm: "Dances of Nature, Love and Friendship by Isadora Duncan," an afternoon gambol in which the Duncan Dance Project and local guest dancers skipped, leapt, and frolicked amidst grasses, trees, and shrubbery to recorded music by Chopin, Schubert and others in a delightful reincarnation of the art spirit. 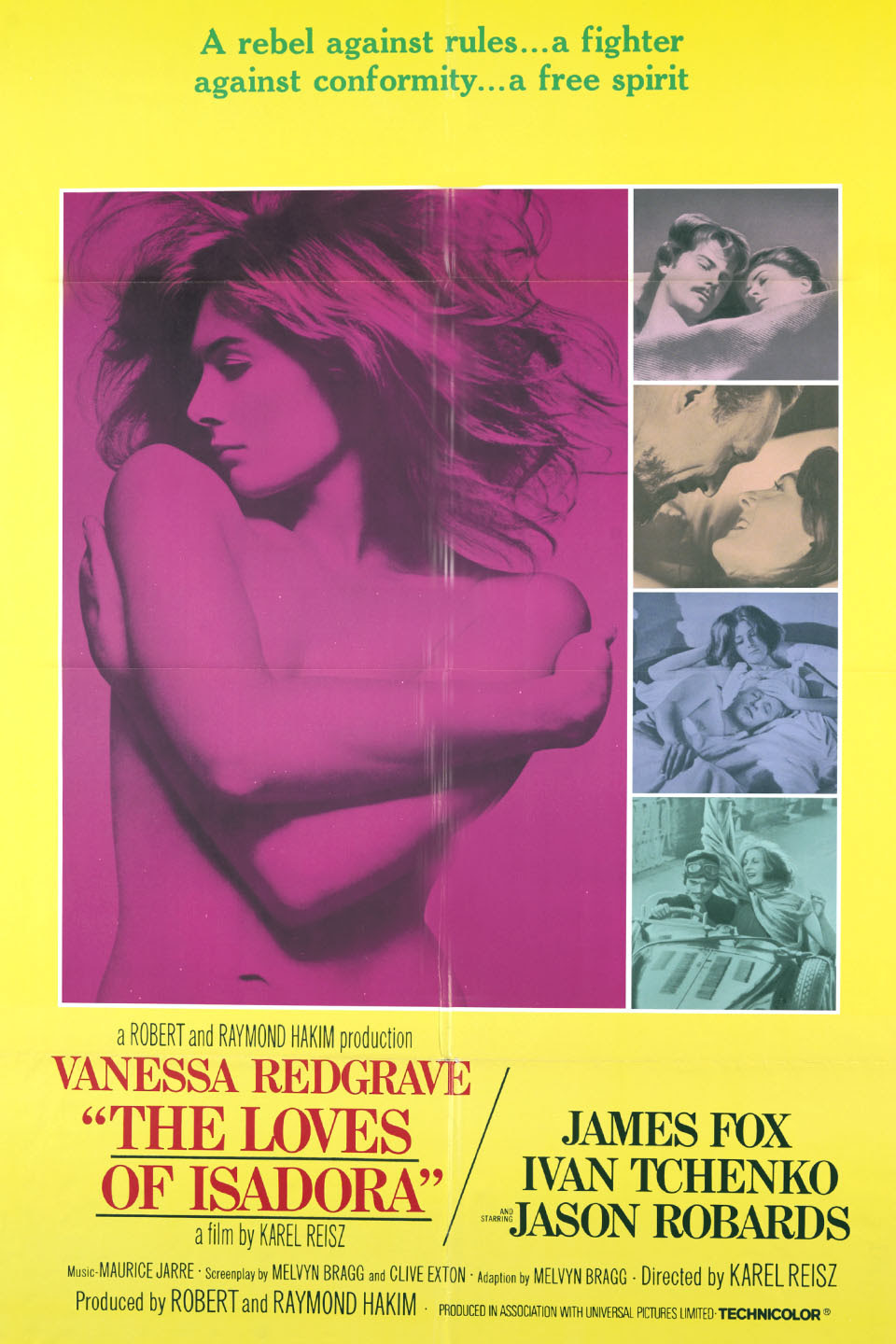 Seeing the dances much as Duncan must have performed them sparked interest in her legacy, leading to compulsive web-surfing of Isadora sites on YouTube and Google, screening Karel Reisz's 1968 "Isadora" starring the radical (and sometimes naked) starlet  Vanessa Redgrave, with Jason Robards and James Fox (screenplay by redoubtable BBC radio host Melvyn Bragg); then pursuing the "Delsart v Stanislavsky" debate over theatrical styles, a cursory study of which made it clear Isadora's poses owed more than a little to gestures used in silent film melodramas.

Of course, Washington being Washington, one could not escape political implications of a salute to Greek civilization by a daughter of the American frontier. Isadora was a Communist who became a Soviet citizen, marrying Sergei Yesenin in 1921 (they separated in 1923), because she held it represented the future. Her progressive bona-fides are beyond question--she believed in revolution, free love, and practised polyamory with women as well as men. Yet underlying her progressive vision was a today unfashionable commitment to Greek ideals of beauty and democracy, as well as an American "do-it-yourself" approach to natural dance that owed much to New England Transcendentalism, as is apparent in her choreography. Isadora was not a classically trained dancer, and her "barefoot" style rejected the restraints of toe-shoes or dancing on point familiar in classical ballet. Her nature-worship, combined with her liberation from restraints, may have been Dionysian...but in another way she was an American original, whose improvisatory approach and lack of technical expertise contributed further to her charms as a performer--Frank Sinatra or Elvis Presley come to mind as similar phenomena closer to our day.

In this individualism, this exceptional quality, she was not only a romantic, she embodied the almost libertarian sense of self championed by writers such as Ayn Rand, who as an anti-Communist likewise developed a cult of artistic personality reminiscent of Isadora Duncan's circle of admirers and "Isadorables." There is a clear commitment to personal liberation, to an aesthetic of freedom, in both women's work. Perhaps the Athenian ideal, the Greek Hero, may equally lead to Libertarianism as Socialist Revolution...if not to Objectivism. 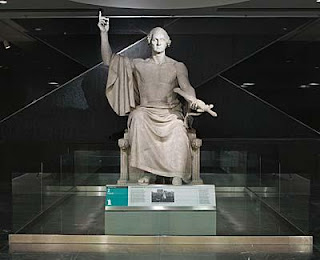 Naturally (if not conventionally), the legacy of Ancient Athens in America dates from the founding of the Republic, on Greek and Roman models, by founders steeped in Enlightenment ideals, who themselves attempted to perfect Classical models. The toga worn by Isadora is not so different from the toga worn by George Washington in his statue by Horatio Greenough, now on display at the Smithsonian Museum. And the Greek columns of Isadora's sets are of a piece with the columns, statues and bas reliefs found on the Capitol, White House, Memorials, Museums and government offices of Washington today.

This perhaps is the greatest gift Isadora Duncan and the Center for Hellenic Studies had to offer a contemporary audience: a reminder that American institutions are the fruit of Classical Civilization; that ideals such as democracy, republicanism, liberty and freedom spring from a shared heritage of what  Edith Hamilton called "The Greek Way."

In reminding us of our inherited Western Civilization, Isadora Duncan stands in memory as an almost-Greek tragic heroine, who sacrificed herself for Art. And, in the tradition of New York Harbor's Statue of Liberty--likewise clad in neo-classical robes, likewise linked to France, an inspiration to the nation. In fact, Duncan paid homage to the French civilizational ideal in her dance to the "Marseillaise," which she composed and performed during the First World War. As she wrote in her autobiography, My Life:

Coming from bleeding heroic France, I was indignant at the apparent indifference of America to the war, and one night, after a performance at the Metropolitan Opera House, I folded my red shawl around me and improvised the "Marseillaise." It was a call to the boys of America to rise and protect the highest civilization of our epoch--that culture which has come to the world through France. The next morning the newspapers were enthusiastic. One of them said:

"Miss Isadora Duncan earned a remarkable ovation at the close of her program with an impassioned rendition of the "marseillaise," when the audience stood and cheered her for several minutes...Her exalted poses were imitative of the classic figures on the Arc de Triomphe in Paris. Her shoulders were bare, and also one side, to the waist-line, in one post, as she thrilled the spectators with the representation of the beautiful figures (of Rude) on the famous arch. The audience burst into cheers and braves as the living representation of noble art."

Professor Nagy and the Harvard Center for Hellenic Studies deserve our gratitude for a heroic effort to promote the values of Western Civilization in our National Capital, in the presentation of "Maenads and Muses: A Celebration of the Dances of Isadora Duncan and the Greek Ideal."


Posted by LaurenceJarvik at 10:28 AM