The Last Days of Leo Tolstoy by Vladimir Chertkov 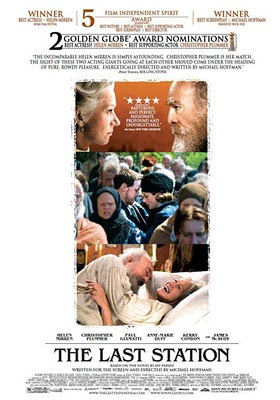 Just saw The Last Station starring Dame (and what a dame!) Helen Mirren and Christopher Plummer. Liked the acting, sets, and costumes. Didn't like the script or direction--or the two youthful leads (why waste screen time on their sex scenes in order to turn Tolstoy into a "supporting" role?). The film lacked a certain tension and ambiguity. Secondary characters were cutouts at best. IMHO, director Michael Hoffman would have done better had he hired a talented screenwriter, so that he would have had an A picture instead of "Classics Illustrated." And he might have hired another director, too. Some of the scenes reminded me of UCLA film school... Though Plummer and Mirren were terrific scenery-chewers. I never read Jay Parini's novel--and won't now--but did find this account on the internet from Vladimir Chertkov, the film's heavy, played like Snidely Wiplash by Paul Giamatti. Still, I liked the film. It was a "good bad movie." Germany doesn't look exactly like Russia, and I missed seeing snow, troikas, and big fur coats (Tolstoy died in November). It's no Dr. Zhivago, but still worth seeing.

BTW, Wikipedia informs me that Michael Hoffman's picture is a remake of the 1912 Russian silent film Departure of a Grand Old Man. IMDB lists a few more films about Tolstoy, including a 1964 Soviet biopic by Gerasimov... Anyhow, here's the link to Chertkov's "The Last Days of Leo Tolstoy"
Posted by LaurenceJarvik at 8:48 PM