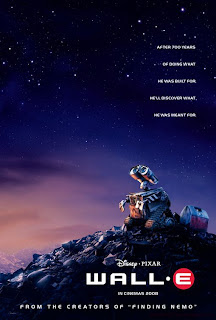 What can I say, I watched this a week ago with someone I know and haven't stopped thinking about it...It's great! On one level, it's a satire of the Bush administration. On another a religious parable ("Eve" behaves quite a bit like Kali, Indian goddess of creation and destruction; the garbage dump WALL-E inhabits resembles the Old Testament's Gehenna; the Axiom space station/cruise ship is someone's idea of heaven or Disneyworld Orlando); the parable is one of redemption and second chances--the "directive" appears to be: "Choose Life!"

Lots of in-jokes remind one of The Twilight Zone, Metropolis, 2001: A Space Odyssey, The Wizard of Oz, Alien (Sigourney Weaver provides one of the voices), et al. And don't forget the Disney legacy--anyone out there remember Victory Through Air Power? Hello, Dolly! is just the tip of the iceberg.

Here's a different YouTube promo:
Posted by LaurenceJarvik at 10:14 AM